The value of the designed territory is its location, which superbly characterises the Estonian landscape, and the North Estonian landscape in particular. From this site, a view of the skyline of the Estonian capital opens across the Gulf of Finland. A valuable building – a palace complex originating from the end of the 19th century – stands on this site. Its new noticeable and informative design – a well-functioning diverse and holistic group of buildings with outdoor space – is based on the current use.

This location has been developed since the beginning of the 19th century. In 1873, the site was bought by General-Adjutant A. Orlov-Davõdov (1837‒1905), Chief of Stables of the Russian Tsar, who ordered the old manor to be rebuilt into a representative palace in 1874.

The palace has housed the Estonian History Museum since 1975. The auxiliary buildings that belong to the main building have exhibition spaces and support rooms for the museum.

In 2014, an architecture competition was announced for the buildings of the Film Museum, i.e. an exhibition and storage building, as well as renovation of the outdoor space. The goal was to create buildings that would blend with the historic complex and existing environment and to design informative and eye-catching outdoor space.

The idea of the outdoor space plan relies on the added functions of the Maarjamäe Palace complex. The network of roads was created in a non-traditional key and modern style, without using historic park design principles.

The area is has an enclosing perimeter wall. In the courtyard, the areas between the buildings take a different form.

The open main square is maintained in front of the Palace, adorned with a historicist fountain with a lion sculpture.

A red carpet (rubber cover) leads to the new Film Museum, which starts at the front of the Palace. The carpet is illuminated with projector lights that have been specially designed for this purpose by Keha3 OÜ, and which create a special festive mood for people standing on the carpet. The benches and dustbins have a special design and are inspired by roll film. A particular landmark in front of the entrance to the Film Museum is a sculpture of a film camera designed by Hansanova OÜ. In addition, a specific system and design have been created for signs and stands.

There is a children’s playground in the shape of Estonia in the courtyard – with dry land and larger islands. The playground shows the North Estonian klint, the main internal bodies of water and rivers, important landmarks and the network of main roads connecting the largest towns. The most important sights of all Estonian towns are depicted on the playground. This map can help explain to children how Estonia was shaped.

An important part of the Estonian History Museum is the display of sculptures with political undertones that were demounted following the restoration of Estonian independence. The sculptures are positioned radially behind the Palace. Their place shows their political hierarchy and position when Estonia was occupied by the Soviet Union. There are sculptures of Lenin, Stalin and some local communist officials.

Greenery is created throughout the entire area. Old trees are maintained as much as possible, and trees and bushes have been designed to ensure the sustainability of the park over time.

In 2018, the project – new buildings and outdoor areas for the Maarjamäe Palace complex – was awarded the grand prize by the Estonian Heritage Protection Board (Muinsuskaitseamet) for a new building fitted into an historic environment and landscaping that values an historic environment. The project also received a 2018 grand prize of architecture by the Cultural Endowment of Estonia for the Film Museum and Maarjamäe Palace complex outdoor area. 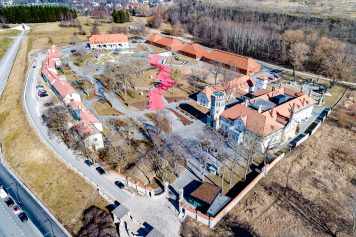 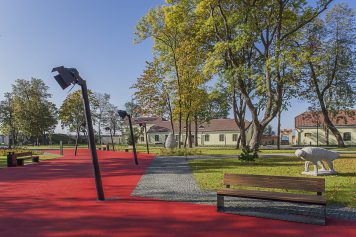 All Your questions are more than welcome. We will respond as quicly as possible. What are cookies?
A cookie is a small text file that is stored on a user's computer or other device when visiting a website. Cookies do not send information from the user's computer. Cookies include all predefined text files, regardless of technological limitations.

Which cookies do we use and for what purpose?
We collect persistent and session cookies that are necessary for the operation of the website, to improve user-friendliness of the website and to provide appropriate advertising.

What data are collected by cookies?
The use of cookies may result in the storage of personal information entered by the user when filling out the form on the website. These include first name, last name, e-mail address, telephone number and a description of the solution required. In addition, device information, location information, IP address, language selection, and other data listed above may be stored.

The personal data of the user will not be retained for longer than is necessary for the purposes of the data collected. If the user’s personal data becomes unnecessary or the user requests their deletion, the data will be deleted within 1 (one) month.

How long are the cookies stored on my computer for?
The cookies’ storage time is different for each cookie. Each time you visit the website, the cookies are updated, which also extends their storage period. Session cookies are temporarily stored while you visit a website. Persistent cookies are stored on the user's computer after the webpage is closed. Permanent cookies have different expiry periods and some remain on the user's device for days, months or years, but can be deleted from the device if desired.

Contact Information and additional information
The website manager and the person responsible for processing the personal data is Siim Lootus located at Suve 2, Tallinn, Harjumaa 10149, Estonia.
If you have any questions or suggestions, please do not hesitate to contact us at by calling us 56496984 or via e-mail siim@lootusprojekt.ee